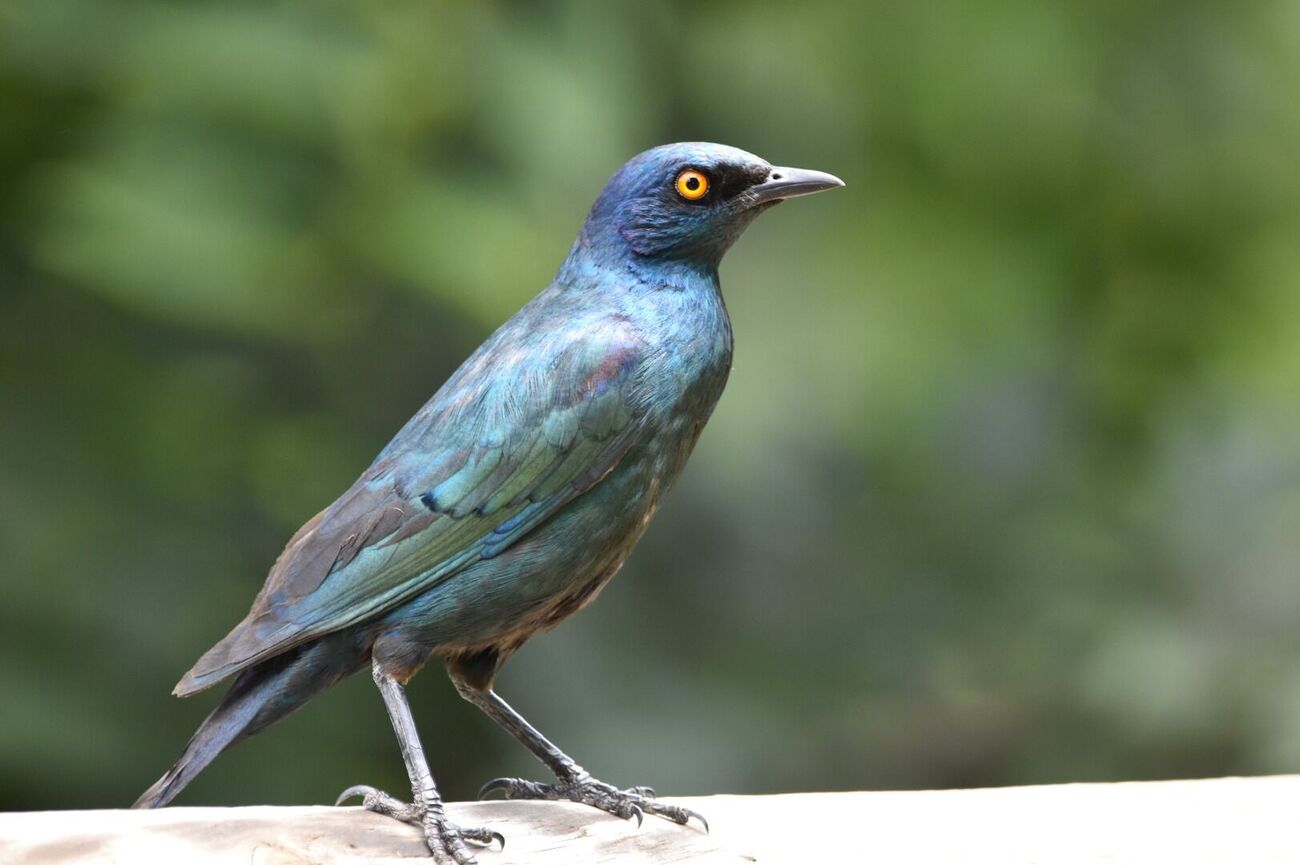 Did you see a bird outside and want to know what it is? Great! Birdwatching is a decision that will bring you closer to nature, allow you to see the beauty in everyday life, and just generally make you a happier person. But where do you begin? All you really need to enjoy birdwatching is a bit of interest, a pair of binoculars (even a cheap pair will do) and a willingness to go outside.

But you live in Gauteng... In the big city - all the birds here are rubbish-eating scum, aren't they? Absolutely not! The number of birds that live in your garden - or if you don't have one, a local park - will suprise you.

According to the South African Bird Atlas Project, sightings of over 350 different species have been recorded in the last month in the mostly urban area of Johannesburg roughly between Randburg and Sandton in the Northern Suburbs. This is more bird species than live in countries like Germany, Italy and the United Kingdom. South Africa may have its problems, but it is certainly a great place to watch birds.

All you need to do is look for them.

Surely you've seen this one. The southern masked weaver is well-known for its bright yellow body and black face with red eye, as well as their distinctive woven nests that give the family of birds their name. Although the yellow and black bird you see in photos is very striking, the male weavers only adopt this bright plumage during breeding season (spring and early summer) to attract the ladies. The rest of the year, they and the aforementioned ladies look a lot more bland. They lose the face mask and assume a dull yellow-brown plumage with streaks on their backs - the males keep the red eye, while the females have a darker red-brown eye. This can make them hard to identify but look out for their thick pink-ish bill, pink legs and dark/red eye. Also, they are everywhere!

3 of the top 10 Gauteng garden birds are doves, and I'm sure you already know why. You can't get away from them. They can seem a bit boring at first, but once you understand them you will start to appreciate them a lot more.

Although they are so common, it can be a bit confusing to identify the different species because they are all very similar, but there are some easy ways to distinguish them once you know what to look for. Additionally, their calls are very distinct! Once you get the hang of their songs, you won't even need to look up to identify them.

The most common dove in Johannesburg is the Laughing dove, named after its 'song' that sounds a bit like a chortling laugh. The colouring of the 3 indigenous doves are all quite similar, but the laughing dove is the easiest to distinguish because it lacks the ring around the back of neck. If you can only see the dove from the front, it also has a distinctive speckled chest, that the others lack. This dove is not only successful in the suburban streets in Gauteng - they range as far as India and Australia!

The largest of the indigenous garden doves, the red-eyed dove is named after the ring of bare reddish skin that surrounds its eye, which is the most distinctive feature. Sometimes this cannot be clearly seen, in which case you can look for the lack of white outer tail feathers in flight, and a much more purple tinge to its plumage than the similar cape turtle dove. But the best tool in your birding toolbelt when it comes to identifying these doves, is to learn the 3 varying calls (see below!).

The 'Turtle' in this dove's name has no relation to actual turtles, but rather based off the latin 'turtur' which relates to the purring 'tur-tur' sounding song. This dove is similar to the Red-Eyed Dove as it has the same black collar around the back of the neck, but lacks the exposed red skin around the eye. This isn't always obvious to see in low light, in which case the easiest way to distinguish the 2 species is by the white outer tail feathers you see as it flies away. But all of this is not necessary if you can learn to recognise the song, which is one of the most common calls to hear across South African gardens and nature reserves, country-wide.

It can be quite daunting to approach learning bird calls at first, but it's easier than you might think! To help in this task, birders often use 'mnemonics' which are just a fancy way of saying that we use similar sounding phrases to help us remember. A great example of a mnemnoic is the actual bird species name "Cuckoo", named after the common european cuckoo whose song actually sounds like "Cu-Koo". By learning a phrase like this, we can easily relate the bird song to the phrase, and the phrase to the bird. This sounds complicated, but trust in your brain's ability to learn, and this will come naturally in no time.

The Cape Turtle Dove's song is a 3 syllable song which people commonly relate to the mnemonic "Work Harder" or "Drink Lager". But you can come up with any mnemonic you want from any 3 syllable phrase. Something obvious like "Cape Turtle" can work!

The Laughing Dove is named after its call, which sounds a bit like a chortled laugh.

Similar to the cape-turtle dove, your best bet is to find a 6 syllable mnemonic that works for you. A common one is "I am a red eyed dove", or to stick with the lager theme, "What do we drink? Lager!"

In the breeding season of spring-time, these guys have a habit of waking up the entire neighbourhood at 5 in the morning with their non-musical "song". The shouting variations of the "HA" call can be heard all over the country and the name "Hadeda" is derived from their call (Ibis is the family of birds that the Hadeda is a part of). These birds are unmistakeable, especially in the suburbs, and are commonly seen in Highveld suburban gardens poking their long beaks into the short grass looking for various forms of creepy-crawlies, including the univerally hated Parktown Prawns.

Definitely my favourite on this list, the dark-capped bulbul is a chatty character with a distinct black crest and yellow 'bum'. This bulbul varies from other similar bulbuls in that it has a completely black eye with no ring around the eye. It sings a wide range of cheerful chatty notes e.g "Cheep-Chop-Tokwick" and are one of the most common birds in its range which extends all the way up to Cairo, in northern Egypt.

This small brown and grey bird has adapted well to the urbanisation of their natural habitats. Commonly associated with gardens and parks, these birds are often first in line at bird feeders and can be recognised with the 'C'-shaped streak extending from their eye around their face. This is most distinct in male sparrows which have a dark black face with a white 'C'. The females also have the 'C', but it is lighter grey against a darker grey face, so it is harder to see - but the boys and girls normally move together in groups as a family, so the distinctive male black and white 'C' should be nearby!

The Bishop family is a sub-species of weavers, and the Red Bishop is a Bishop that has an unmistakeable bright red and black plumage in breeding season. While they are strictly grassland and savanna birds, they are rarely found far from a water source - so you might not see them around if your garden/park has no open water (a~ bird bath is often enough). Much like the Southern Masked Weaver, the Red Bishop male only sports the bright colouring during breeding season (Spring/Summer) while the rest of the year, they closely resemble the females who are rather indistinct, but are recognisable through their light yellow-ish eyebrow and thick pink conical beak. They also typically flock in groups which can help you identify them when they are not giving you much in the way of distinguishing features!

Another bird named after its call, the Grey Go-Away Bird can commonly be heard calling "go-WAY" in alarm when it perceives a threat. These birds are still commonly referred to as Grey Louries, but more recent developments in the science of birds found that Louries are part of the Turaco family and the name Lourie was scrapped. The other species of Louries were renamed to Turaco, but the grey variant got its own unique name Go-away bird. These birds are large and easily recognisable with their grey feathers and long grey crest. They have a varied diet including seeds, leaves, fruit and interestingly, they are one of the few birds in South Africa that eat flowers, Acacia flowers being a particular favourite of theirs.

Humanity's effect on the birdlife in South Africa isn't limited to affecting populations of native birds, humans have also introduced birds from overseas - some of which have done very well in the amazing climate and conditions that we call home. These are commonly known as 'alien' species, and are normally considered invasive pests as they compete for resources and habitats of indigenous birdlife. Despite this, they are here to stay and it is important to know how to recognise them. The individual birds are not to blame, so we might as well enjoy them instead of hate them.

The Common Myna is native to India and South-East Asia, and is often referred to as the Indian Myna. It has been introduced by humans to every habitable continent of the world and is extremely successful and generally associated to human settlement. The story goes that in the late 1800s, they were introduced to help control Grasshoppers and Locusts that ate farmers' crops but this was never successful until, in 1902, a group of birds managed to escape a pet trader in Durban and these few birds have multiplied to millions and have expanded all the way up the highveld to become one of the most common birds in Urban and Suburban Gauteng

Another common alien species, the Rock Dove was introduced to South Africa multiple times since the 1600s through various domestic escapees where they were used as homing pigeons, delivering messages before the days of the internet. Rock Doves are also the same species that have been bred to be the perfect white doves released at funerals, weddings, magic shows, etc. These birds breed with the existing populations of Rock Doves and have caused a wide variety of colour morphs.

Gardens and Parks in Gauteng Cities

Today it is vastly different. The region has been transformed into what is often called "the world's largest man-made urban forest". This 'greening' of suburbia has involved a dramatic increase of both indigenous and exotic trees as well as open water, and this has transformed the bird community that lives here. Most of the grassland specialists have all been 'chased out' and replaced with a diverse mix of fruit-eaters, waterbirds, tree-cavity nesters and cliff nesters (what is a building to a bird, other than a man made cliff?).

If you live in Joburg or Pretoria and are just starting birdwatching, you don't have to go anywhere to start appreciating our avian friends. The 10 birds on this list are just a start to what you can see in your garden and you will certainly see a whole lot more birds that you won't identify when looking for this small selection. But you have to start somewhere, so get out there with a pen and paper and check these birds off your list as you see them!